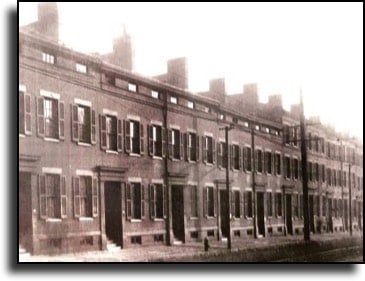 In 1829, upon the death of Auguste Chouteau, one of the founders of St. Louis, the land where the Field House Museum now stands was deeded to the City of St. Louis with revenues from the lease of the land earmarked for the support of the city schools. Sixteen years later, in 1845, with St. Louis still clustered close to the Mississippi River and its steamboat commerce, Edward Walsh leased the land from the school system and built 12 row houses known as Walsh’s Row.

In 1850, Roswell Martin Field and his wife, Frances Maria Reed Field, leased the second unit from the south end, the family home until 1864.

In 1934, when Walsh’s row was scheduled for demolition, Irving Dilliard wrote a spirited editorial in the St. Louis Post-Dispatch decrying the destruction of Eugene Field’s birthplace. Jesse Powell Henry and Carl Peyton Daniel, Sr. , formed a committee to save the house, and the Board of Education took possession, preserving that single unit of Walsh’s Row.

In 1935 and 1936, during the “Great Depression,” school children in the St. Louis Public Schools collected nearly $2,000 to help save the Field House. It was restored and opened as a museum in December of 1936, and to this day, school groups from the St. Louis City public schools are admitted free.

In 1968, the Board of Education gave up active operation of the museum, which is now professionally operated under the supervision of the Board of Trustees of the Eugene Field House Foundation, Inc. Beginning in 1999, the house is underwent a complete renovation and restoration of both the exterior and interior.

Today the house is a museum and memorial – an early Victorian jewel, reflecting the era in which Roswell, Frances and Eugene Field lived within its walls. Featured exhibits include artifacts from Eugene’s personal collections at “Sabine Farm”, his Chicago home.

You can see a special video about the house and its status shortly before the National Historic Landmark designation, done as part of our local PBS station’s series “Living In St. Louis”.

In March of 2007 the Eugene Field House was designated as a National Historic Landmark by Interior Secretary Dirk Kempthorne. The announcement stated:

“Field House, St. Louis, Missouri, is the home of Roswell Field, the attorney who formulated the legal strategy that placed slave Dred Scott’s lawsuit for freedom before the Supreme Court. In Scott v. Sandford, one of the most controversial cases of the 19th century, Supreme Court Chief Justice Roger B. Taney declared that no slave could be a U.S. citizen and that the Missouri Compromise of 1820 (that abolished slavery in the territories) was unconstitutional. The 1857 decision widened the political gap between the North and the South and helped precipitate the Civil War. The most effective critic of the decision was Abraham Lincoln, a relatively unknown Illinois lawyer, whose attacks on the case thrust him into the national political scene. Anger over Taney’s decision energized the Republican party and led the nation’s first antislavery political party to victory in 1860. It took the civil war and post-war constitutional amendments to overturn the Dred Scott decision.”

The National Historic Landmark designation is the highest such recognition accorded by the nation to historic properties determined to be of exceptional value in representing or illustrating an important theme, event, or person in the history of the nation. These landmarks can be actual sites where significant historical events occurred, places where prominent American lived or worked as well as sites that represent the ideas that shaped the nation. Today, fewer than 2,500 historic places bear this national distinction. Additional information on the National Historic Landmark program can be found on the NPS website at www.cr.nps.gov/nhl

Free Afternoons invites visitors to explore the Field House Museum’s expansion at no charge. View the latest exhibitions, browse the gift shop, and stop in the Eugene Field Library for an afternoon of fun and...
View Calendar
Add

Luckily, our faux marble fireplaces (on both floor

We’ve found some damage to the ceiling throughou

Today is #NationalFreedomDay, an observance of the

While most of the plaster & wallpaper on the 1st f

With Valentine's Day just around the corner, now's

Today is #NationalPuzzleDay! Although we tend to t