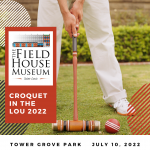 Thank you to everyone who made Croquet in the Lou a success! We had an amazing day in Tower Grove Park playing a friendly croquet tournament. Special guests Jodie Fusz Rugart, the #1 USA Women’s Croquet Champion, and her husband, championship-level player Conrad Rugart joined the tournament to give tips and pointers to players.

The Field House Museum would like to thank the following
Croquet in the Lou 2022 Sponsors:

Croquet in the Lou 2022 Honorary Chairs

Thank you to the following supporters of
Croquet in the Lou

The game of croquet was first referenced in print in London in 1856 but is believed to have originated in the Middle Ages. Rules include hitting a wooden ball with a mallet through a hoop or “wicket.” Eugene Field was undoubtedly familiar with the game (and its reputation for being intensely competitive) as he mentions croquet in The Tribune Primer: 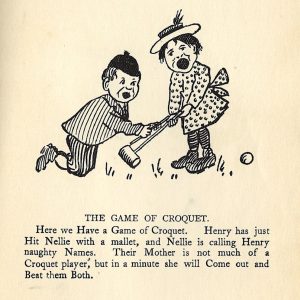 The Game of Croquet

Here we have a game of croquet.
Henry has just Hit Nellie with a mallet, and Nellie is calling Henry naughty Names.
Their mother is not much of a Croquet player, but in a minute she will Come out and Beat them Both. 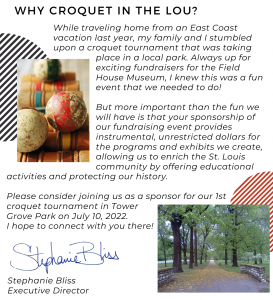 Become a Sponsor of Croquet in the Lou!

Join in on the fun at Tower Grove Park for Croquet in the Lou – a FUNdraising event for the Field House Museum.

Becoming a sponsor of Croquet in the Lou not only helps the Field House Museum’s mission but also gives you and your organization a chance to further your impact on the St. Louis Community! Funds from our event will fund restoration work to the National Landmark Field family home and create new programs and exhibits for the Museum.

Contact Stephanie Bliss at 314-431-4689 or submit the Sponsorship form to s.bliss@fieldhousemuseum.org to join in the fun!

Free Afternoons invites visitors to explore the Field House Museum’s expansion at no charge. View the latest exhibitions, browse the gift shop, and stop in the Eugene Field Library for an afternoon of fun and...
View Calendar
Add

Luckily, our faux marble fireplaces (on both floor

We’ve found some damage to the ceiling throughou

Today is #NationalFreedomDay, an observance of the

While most of the plaster & wallpaper on the 1st f

With Valentine's Day just around the corner, now's

Today is #NationalPuzzleDay! Although we tend to t